With the youngest baby boomers reaching the half century milestone this year, Research Now has carried out a study to gain insight into this generation of consumers. The study of 1,200 respondents aged 50 – 65+ years old from the UK, looked at how members of the baby boomer generation feel about themselves, aspects of their lifestyle, attitudes and behaviours towards technology, and perceptions of brands and advertising.

The brands and products which were named most frequently as doing well at representing the baby boomer generation in advertising are:

Murray said: “It is also important to note which brands and products were hardly mentioned, such as fitness brands (despite 69% of baby boomers exercising at least weekly), technology brands (despite high technology consumption), automobiles (despite that for 72% of baby boomers, driving their own car is their primary transportation) and food brands (M&S likely to be mentioned in reference to ‘Leading Ladies’ clothing campaign).”

They feel misrepresented in advertising

This shows that marketers are missing the opportunity to appeal to this demographic, by excluding them from advertising, Research Now claims.

When researchers combine smartphones with the Blackberry, they found a net usage of 54% within the baby boomer age group.

More than one in 10 baby boomers (12%) say they are among the first to try a new technology product, though the majority say they are in the middle when it comes to trying a new product (59%).

This article originally appeared in the Retail Times UK Oct 1, 2014. 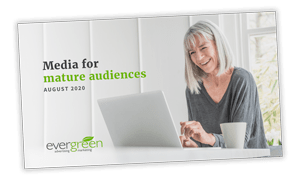